Let yourself be carried away - to the events on the slopes of the mountains Sísemol and Katz in the Italian Veneto during the First International Gliding Competition in Italy.

Read original reports of the German record pilots Arthur Martens and Fritz Papenmeyer from that time shortly after the First World War. Together with the students of the University of Pavia, they were the international stars of the competition. Compare the points of view, the differences in development and the tensions between the cultures from the point of view of the time. The Italians only began gliding here, while the Germans had been collecting records for several years. The German gliders were also technically more advanced and had already been successful in the Rhön competition.

Read a lively chronicle with many anecdotes - e.g. why Italian customs confiscated German gliders or how the mule "Matricola" with its unbridled appetite perhaps even influenced the competition. These and many other stories, a detailed chronicle of the competition - meticulously researched by the author, about 90 historical photographs, new highly detailed drawings of the participating gliders by Vincent Cockett and humorous watercolours by Werner Meyer offer you an entertaining and interesting reading.

There are no reviews yet.

Be the first to review “Asiago 1924” Cancel reply 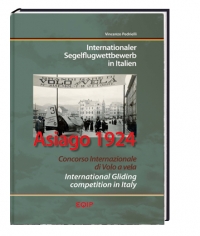